This report outlines the use of tension/trauma releasing exercises (TRE) for invoking the body’s innate tremor mechanism in an Australian former soldier who experienced post-traumatic stress disorder (PTSD) following acquired brain injury after a major motor vehicle accident (MVA) in 2009. Compared to pre-intervention, improvements in physical and emotional wellbeing immediately following the intervention is clinically significant, as was further improvement in perceived stress at one and four months, with ongoing use of TRE.
Conflict of interest: The authors declare no conflict of interest.
Key words: Tension/trauma releasing exercises, TRE, PTSD, military and veteran health, tremors, case study

Using current evidence-based treatments only onethird of people presenting with post-traumatic stress disorder (PTSD) recover fully while 30–40% gain no benefit(1). With around 80% of recent PTSD research being in neuroscience, there is a need to develop innovative approaches that address the neurobiology of PTSD. Adjunct therapies focusing upon wellbeing and calming techniques potentially have a valuable role to play1.

TRE, originally referred to as tension/trauma releasing exercises, is a promising somaticallybased approach used in trauma recovery, stress management and conflict resolution programs around the world, including in military and veteran populations. TRE was developed by Dr David Bercelli, a trauma therapist certified in field traumatology,
neurotherapy and psychoneurology. Ongoing development occurred from his experience and further research of the tremor response, observed during and immediately following traumatic events in people in war-torn countries. TRE uses a series of seven simple exercises to deliberately induce the body’s innate tremor mechanism2,3 in a safe and
controlled way. The tremor evoked by TRE remains unclassified but is perhaps closest to physiological tremor4,5, that is, it is a normal neurophysiological response. While the Diagnostic and Statistical Manual of Mental Disorders (DSM-5)6 pathologises spontaneous shakes and tremors as a symptom of PTSD, TRE recognises that trembling or shaking can be a ‘natural physical response’ to relieve tension, reduce hypervigilance and restore somatic and autonomic nervous system (ANS) homeostasis1,3,7. TRE draws on a polyvagal trauma-informed model of the nervous system8,9. The Polyvagal Theory posits that the neural regulation of the ANS is an unconscious reflexive response to threat, which passes through three phylogenetically ordered stages from social engagement (ventral vagal response), through mobilisation (sympathetic fight–flight response) and into immobilisation or freeze (dorsal vagal response/shutdown); this is often referred to as the ‘defence cascade’10. In the context of TRE, a similarly reflexive process, but in a phylogenetically reverse order, is thought to occur, whereby the release of the dorsal
vagal immobility response results in the expression of movement (tremor/shakes) as part of the body’s innate mechanism to discharge sympathetic arousal and down-regulate the ANS to a more calm and relaxed ventral vagal state.

A US Military study by Moore et. al. (2011), reported that TRE appears promising for its ease of use and immediate benefits of reducing hyperarousal and muscular tension11. Further studies suggest TRE is feasible as a potential method for improving quality of life(12-15), with a controlled trial of TRE for PTSD recovery among veterans currently being conducted by the US Department of Veterans Affairs16.

History
A 48-year-old former Private served in the Australian Army as a tradesman for the Royal Australian Electrical Mechanical Engineers, from January 1987 to August 1993. He saw no active deployment. He presented with a history of PTSD following an acquired brain injury after a major motor vehicle accident (MVA) in 2009. He was placed in an induced coma for six days after experiencing fractures to his pelvis, ribs, face and skull. He also suffered a dislocated collarbone and jaw, collapsed lung and crushed carotid artery. Following facial reconstruction, he undertook six months of rehabilitation including physiotherapy and neuropsychology. He has been unable to work due to anxiety, hypervigilance, intrusive thoughts, ‘an inability to sit still’ and being in ‘constant survival mode’. He continues to have ongoing specialist medical and psychological support and has explored a range of self-development trainings and complimentary therapies including kinesiology and network chiropractic. While these treatments have been helpful, he was concerned he could only gain a sense of relief through external sources, and at the recommendation of his kinesiologist, learnt TRE at a 2-day group training in May, 2018.

The intervention: TRE
The 2-day training consisted of psychoeducation in the context of TRE, including the role and purpose of shakes and tremors as a natural recovery response to restore the body towards homeostasis. The practical component involved learning to activate spontaneous movements, including shakes and tremors in a safe, controlled and self-regulated way through guided group practice twice daily (Table 1). 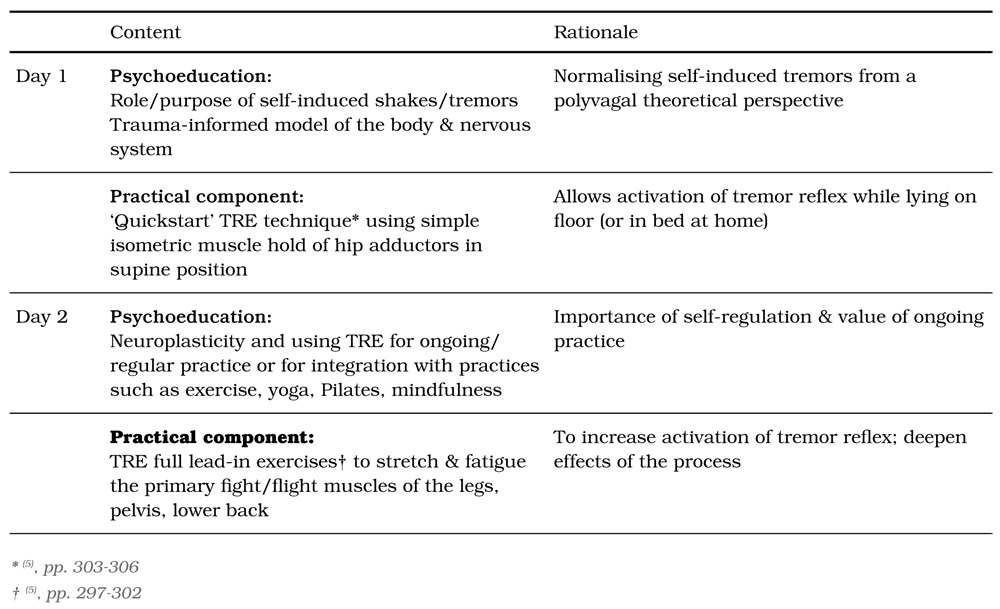 The measures
The Perceived Stress Scale (PSS) was completed immediately before, and at one- and four-month intervals post training. Individual scores on the PSS can range from 0 to 40, with lower scores indicating
lower perceived stress.

A specifically designed evaluation questionnaire of seven items using a Likert Scale from 1 (indicating extreme discomfort) through to 9 (indicating extreme comfort) was used to evaluate how the participant felt immediately before and after the training (TRE Evaluation Questionnaire). Individual scores for the evaluation of comfort or discomfort can range from 7 to 63, with higher scores indicating improvement, that is, a decrease in body tension, pain, anxiety, disconnection and negative thoughts; an increase in energy, and positivity in the ability to cope with life stresses.

Table 2 shows a marked lowering of perceived stress, from pre- to one- and four-months post training.

Figure 1 shows a marked improvement in the evaluation of comfort/discomfort measures from pre- to immediately post training. 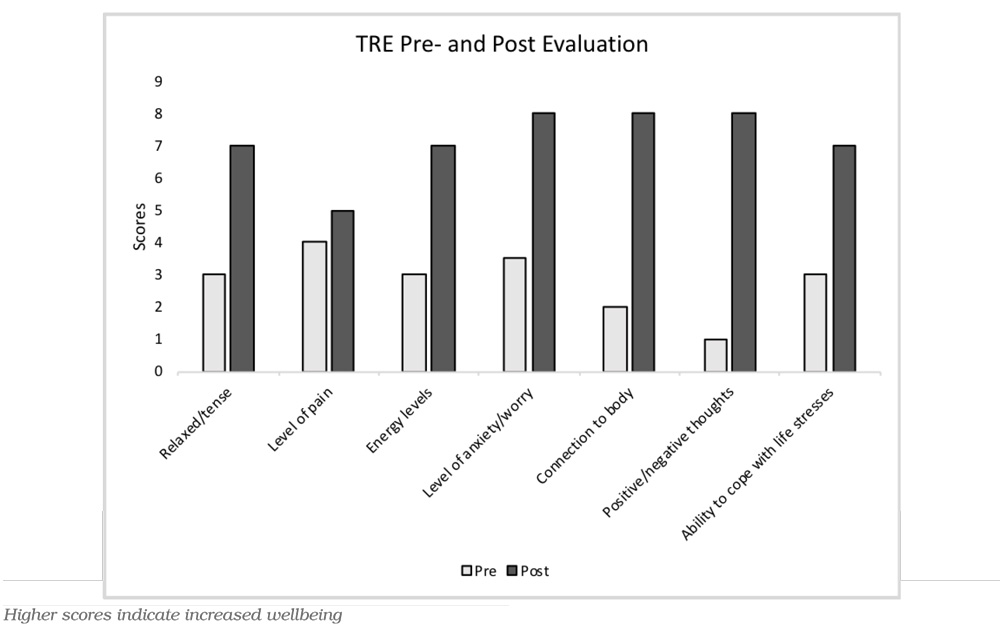 TRE self-care practice
During the first month post training, the former soldier used a combination of the full TRE lead-in exercises (repeated on 5 occasions) and a ‘quickstart’ technique (repeated on 13 occasions) to invoke the shaking/tremors (Table 1). The majority of sessions lasted 30 minutes. (Generally, most people actively tremor for 10 to 20 minutes, self-regulating their experience and duration). 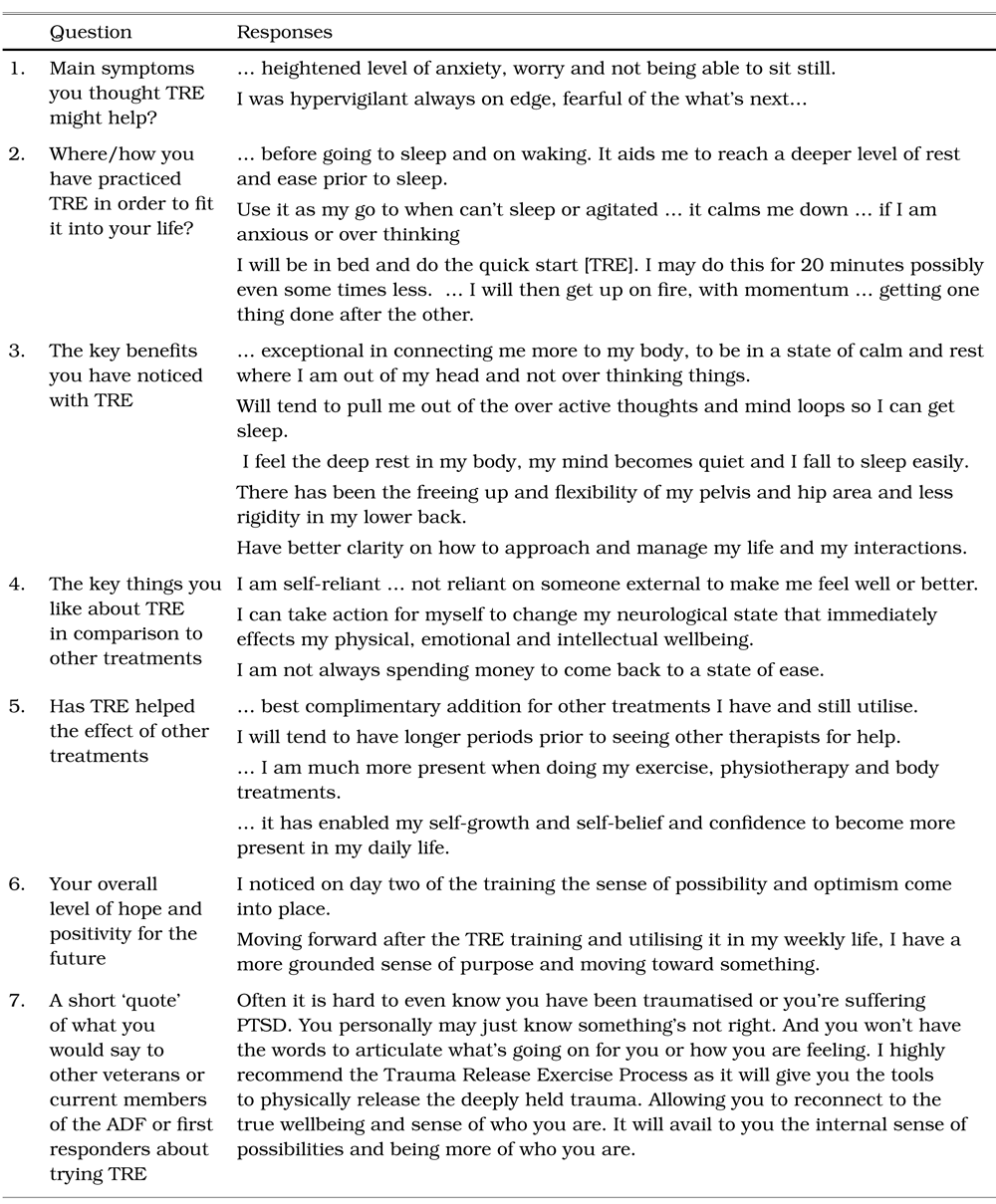 Ongoing use and benefits of TRE
Four-months post training, the former soldier continued to use TRE, predominately prior to sleep and upon waking. He reported noticeable physical and psychological benefits including being more comfortable and at home in his body, sleeping better, feeling more self-reliant and motivated, with increased flexibility in his hips, pelvis and lower back. He also reported that TRE was a complementary support to other treatments that resulted in ‘longer periods prior to seeing other therapists’ and he was ‘not always spending money to come back to a state of ease’. Examples of responses are provided in Table 3.

With pilot training already provided to military and emergency services in the US, Brazil, Switzerland, Norway, Austria, Ukraine, Canada and Poland, TRE appears well accepted by military and veteran populations as a preventative wellbeing practice that does not require a therapist once correctly taught, or an expectation to recall or talk about past events.

The ability to use TRE lying down makes it accessible for people that are least likely to undertake practices that require more time, effort or mental focus, such as mindfulness and exercise, demonstrated by the former soldier using the technique on a routine basis in bed as well as ‘at call’ as his ‘go to’ preference for anxiety, rumination and inability to sleep.

As the tremor mechanism is postulated to be an innate homeostatic reflex to ‘switch-off’ the acute stress response12 the immediate changes in PTSD symptoms reported in this case study are not unexpected from a neurobiological standpoint. A reduction in baseline levels of somatic tension (Figure 1) may possibly account for some of these changes, with the calming effects of TRE being experienced immediately, also a finding in the Moore et. al. report11.

Despite recent advances in the understanding of PTSD relative to ‘moral injury,’ where there is a violent incursion of key beliefs about the world,1 the prevailing model continues to be classical fear-conditioning1. This model suggests the body undergoes its normal defence cascade in response to trauma10 then experiences a problem with the ‘stop-process,’ leaving the person ‘in a permanent and distressing state of hyperarousal even when no perceived threat is present’.1

As spontaneous movements appear to be a homeostatic reflex that releases somatic tension and ‘switches off’ this hypervigilant response,17 there is concern the current individual, pharmacological and medical suppression of shakes and tremors as a ‘symptom’ of shock, anxiety, fear and PTSD, may inadvertently be increasing the risk of PTSD, vicarious trauma, compassion fatigue and burnoutamong military personnel and veterans. Just as decreasing the conditioned fear response within a short consolidation window appears to be important in the prevention of PTSD,18 the ability for TRE to be learnt in a group setting and then used ‘at call’ appears to give it potential as a non-therapeutic early-intervention technique.

A limitation in this case study is the use of only one validated measure, the PSS.

TRE is a cost-effective self-care technique that appears well suited to answer the call for innovative approaches to address the neurobiology of stress and trauma. As the suppression of spontaneous movements including shakes and tremors may be inadvertently increasing the risk of PTSD, vicarious trauma, compassion fatigue and burnout, the results of this case study, supported by previous research, suggest further investigation into TRE and the role of spontaneous movements in trauma recovery is not only warranted but vital.
Corresponding author: Dr Jill Beattie,
jill.beattie@monash.edu
Authors: R Heath1, J Beattie2
Author Affiliations:
1. TRE Australia
2. School of Nursing & Midwifery, Monash University