More than a century after its establishment, many Royal Australian Navy (RAN) uniforms and ranks still reflect those used by the (British) Royal Navy (RN).The first of this three-part article described the history of Navy sailor uniforms since 1509,1 while this part examines the development of Navy medical and dental sailor uniforms for male and female personnel since 1879.The third will describe the evolution of Navy medical and dental sailor rank and rate badges since 1827.A subsequent article will do likewise for RAN health officers.

The first reference to Navy medical assistants is dated 1597, where they were referred to as ‘loblolly boys’; the name derived from a thick porridge, often enriched with pieces of meat or vegetables for sick and injured crewmembers. Loblolly boys also restrained patients during surgery, obtained and cleaned surgical instruments, disposed of amputated limbs and emptied and cleaned toilet utensils.2

These duties were performed at sea on an ad hoc basis by sailors or marines who either had some interest in caring for the sick or were deemed useless for any other seagoing duties. In addition, these duties were sometimes performed by women, who ranged from sailor’s wives to prostitutes.3 It was not until the early 18th century that loblolly boys conducted their duties in a dedicated sick bay.4

Treatment for ill and injured British seamen ashore before 1672 was provided wherever accommodation was available, in accordance with the Laws of Oléron.5 The first British naval hospital was founded that year at Plymouth during the Third Dutch War (1672–74).Additional Navy hospitals followed in 1691 at Greenwich and Chatham during the War of the Grand Alliance (1688–97), and at Portsmouth in 1745 during the War of Jenkin’s Ear (1739–48).6

Over the next century, nursing duties ashore were conducted on similar but separate terms to that afloat, by non-qualified, non-proficient female nurses, assisted by itinerant pensioners and laborers. The women were replaced by men in 1854, with a view to amalgamating nursing care ashore with that afloat. However, these men were still not assessed for their suitability for nursing duties, nor did they receive any training.7

Sailors who had completed gunnery training in Portsmouth aboard HMS Excellent in 1830 (later moved ashore to Whale Island), were the first to be given a formal job description or ‘rate’ as gunners.8 Ships’ captains were instructed to allocate dedicated sickbay staff in 1833; however, the only requirements were that they had to be over 18 years old, be able to read and write, possess a fair knowledge of keeping accounts and pass a medical examination.9

While these seagoing health staff were divided into three classes (Assistant Sick Berth Attendant, Sick Berth Attendant and Sick Berth Steward), their career progression through these ranks was entirely dependent on local service requirements, resulting in inconsistent and unfair advancement. When not at sea, they undertook non-medical duties, whether they were retained aboard non-seagoing ‘guard ships’ or even when released to work in local port hospitals.10

It was not until 1884 that sick berth staff received a formal training and career structure, based on that for officer stewards.11 On completing 18 months’ training, sailors were rated Sick Berth Attendants and sent to sea. After 3 years they were eligible for promotion to Second Class Sick Berth Steward (equivalent to Second Class Petty Officer) and returned to sea. After an additional 3 years, they were rated First Class Sick Berth Steward (equivalent to First Class Petty Officer).12

In 1890, all CPO fore-and-aft jackets acquired gilt buttons and became the ‘Class I’ rig, while the square rig became the ‘Class II’ uniform worn by ‘military branch’ seaman personnel. ‘Class III’ uniform referred to fore-and-aft double-breasted jackets with black horn rather than gilt buttons, ties and peaked caps for wear by non-seamen ‘civil branch’ personnel. Among other branches, these included Junior Sailor Sick Berth Stewards and ‘artificer’ engineering sailors,16 which probably explains why Navy medical staff are often still referred to today as ‘sickbay tiffies’. Class III rigs for male medical and dental junior sailors were abolished in the RAN in 1959.17

The RAN introduced dental mechanics in 1920,18 and the following year all medical and dental sick berth stewards were renamed Sick Berth Attendants (SBAs).19 RAN dental rates were issued with ‘bluette’ (medium blue) working overalls from 1925.20 In 1948, dental sailors were split from medical SBAs into their own branch. In 1953, the RAN replaced the white jackets for medical and dental sailors undertaking patient duties with the current white ward working dress.21

RAN SBAs and dental assistants were renamed Medical and Dental sailors in 1974.22 All square rig and fore-and-aft rig uniforms for office-type duties were replaced by the current utility or ‘battledress rig’ (similar to that worn by Army and Air Force personnel) in 1998.23 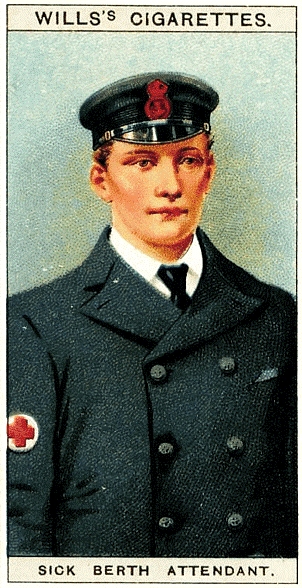 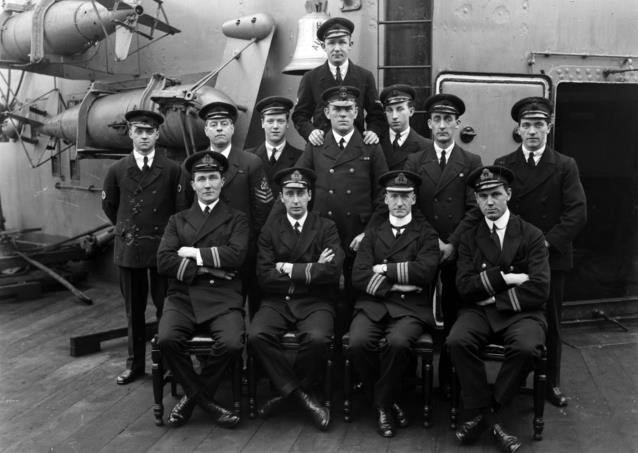 Medical Department, HMAS Australia I, 1918.25 Note the
Class I and Class III fore-and-aft rigs worn by the sailors in the back two rows, rather than Class II ‘square rig’
worn by seaman branch personnel. 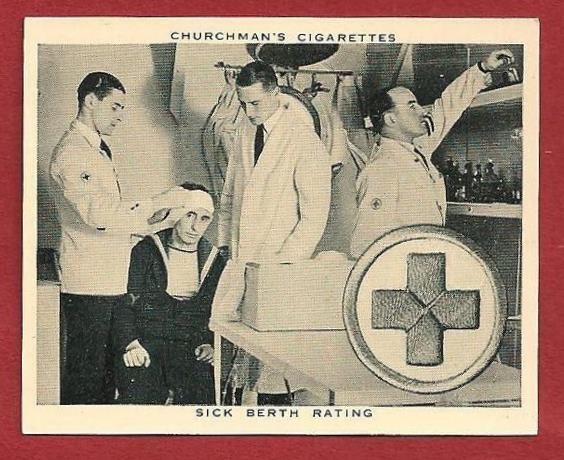 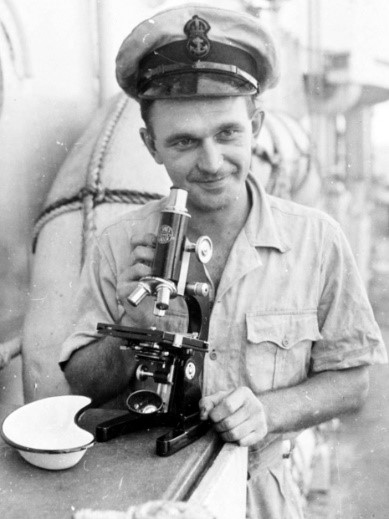 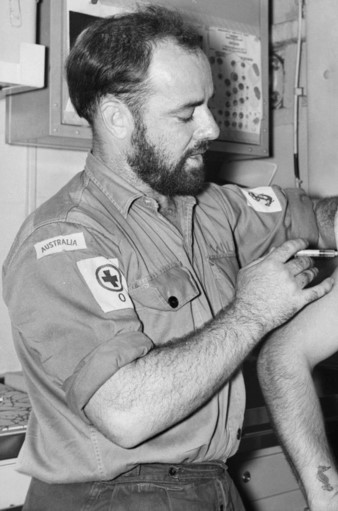 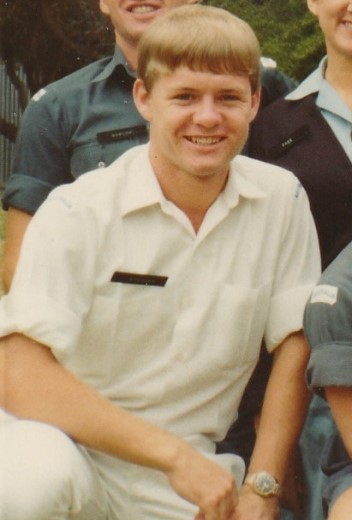 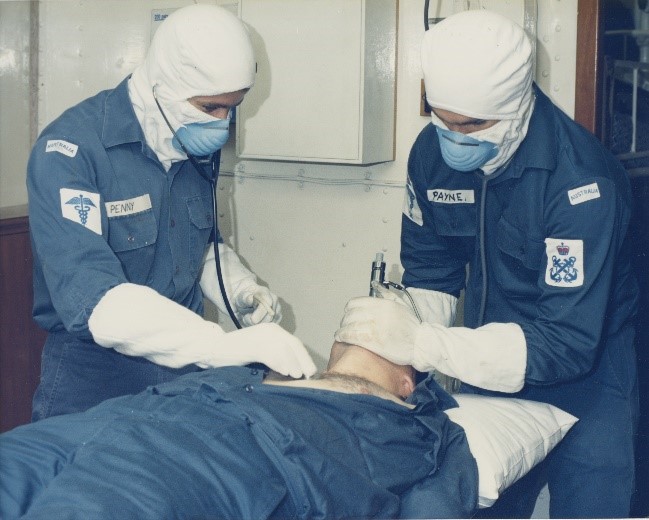 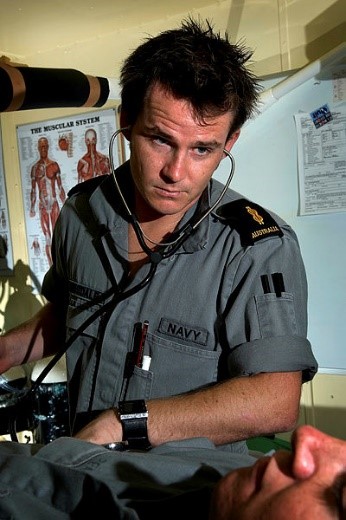 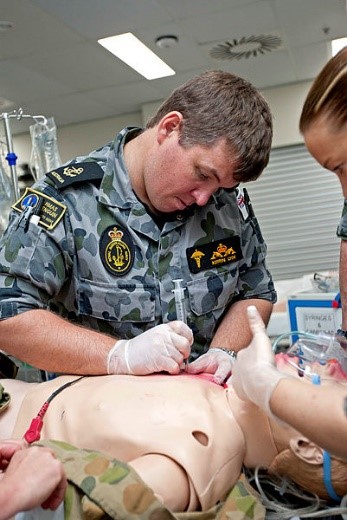 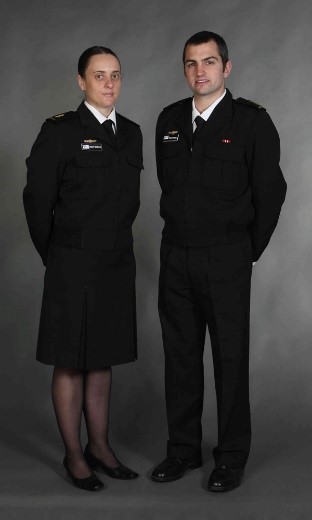 Winter utility jacket or battledress rig for office-type
duties, 2017.31 Note the similar cut to the 19th century
‘bluejacket rig’ per Part One of this article series.

Forty-four female health sailors (including 11 dental sailors and a single dental mechanic)32,33 served from 1941–1948 in the wartime Women’s Royal Australian Naval Service (WRANS).34 The winter uniform for WRANS junior sailors consisted of a feminised Class III jacket, matching skirt and broad-brimmed felt hat, with the same cap badge as worn by males. A blue summer frock with a white belt and collar was introduced in early 1942, which was replaced from 1943 until 1953 by a khaki dress.

Female SBAs were recruited into the postwar WRANS from its recommencement in 1951,35 while the first female dental sailors were recruited in 1975.36 Apart from the felt hat, the postwar winter WRANS uniform was similar to the wartime version. Female senior sailors still wear the tricorne cap originally intended for (British) Women’s Royal Naval Service (WRNS) personnel, while RAN female junior sailors have worn the same cap as males since 1993.37

The WRANS was incorporated into the RAN in 1985, and in 1991 the ‘WRAN’ sailor rank titles (per Table 1) were abolished in lieu of those used by males. The first Navy maternity uniforms were introduced in 1993,38 while female RAN junior sailors have worn their own square rig ceremonial dress uniform since 1997.39

Like all other WRANS personnel, female medical and dental sailors who joined before 1983 did not have a seagoing obligation. This largely – but not entirely – precluded their need for action working dress until 1992.Since then, female sailors have worn the same uniforms as males, apart from skirts as an alternative to trousers for some uniforms. 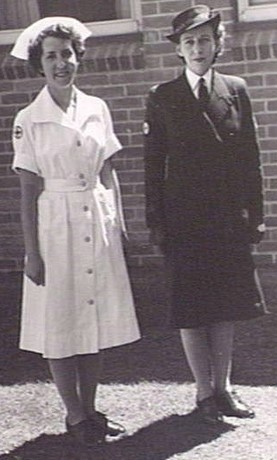 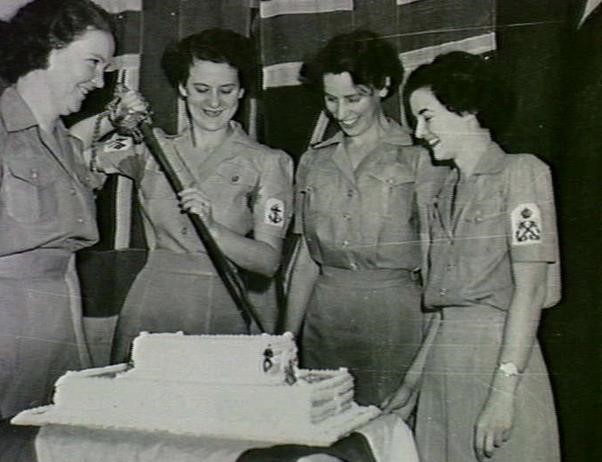 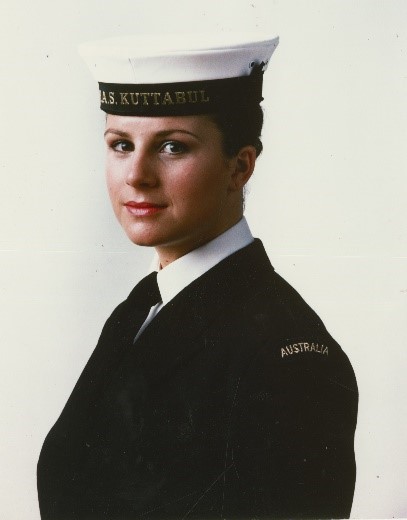 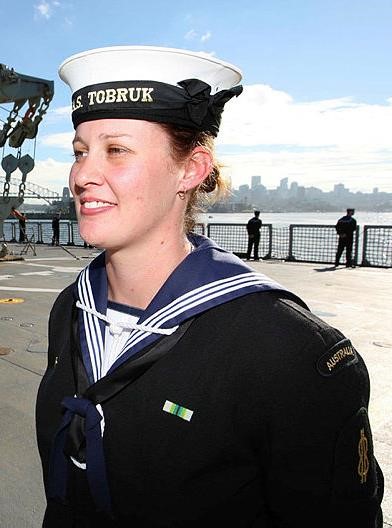 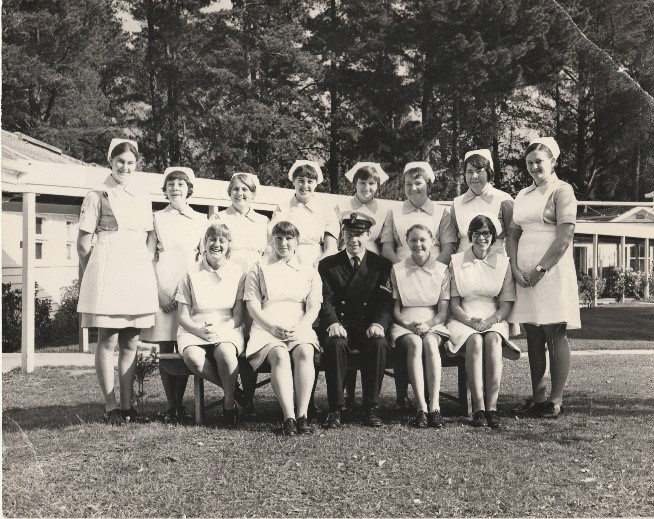 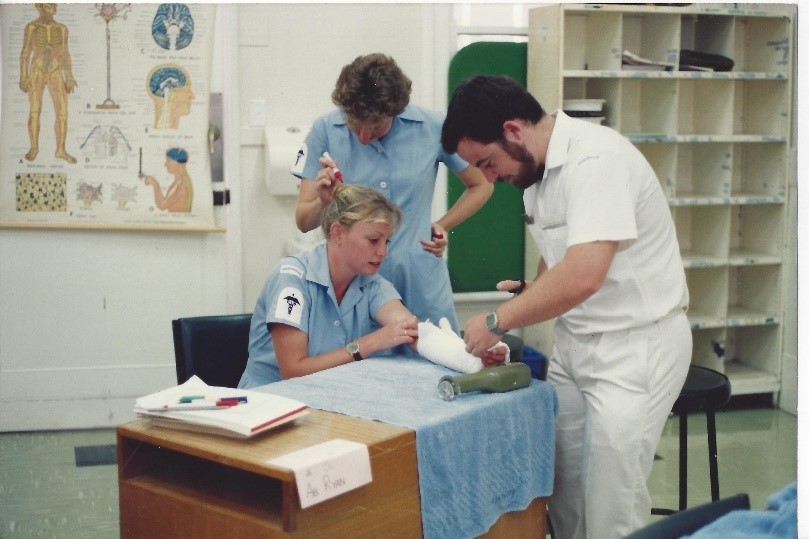 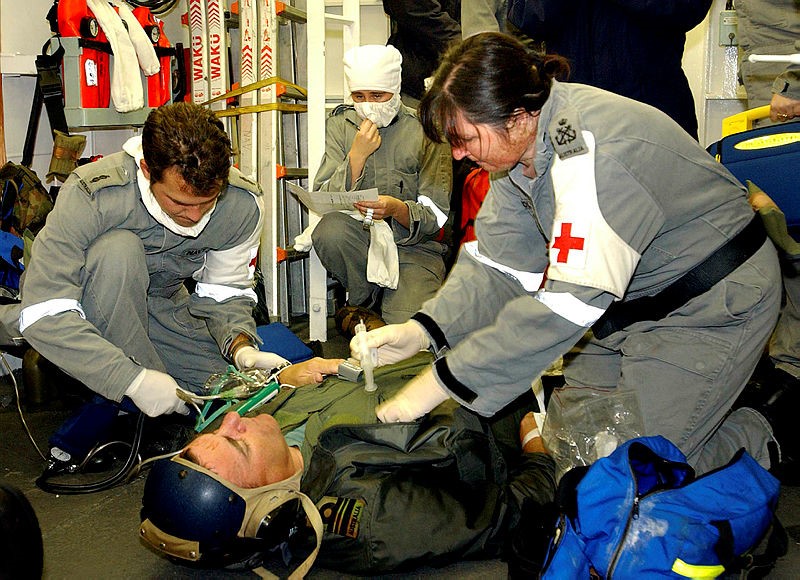 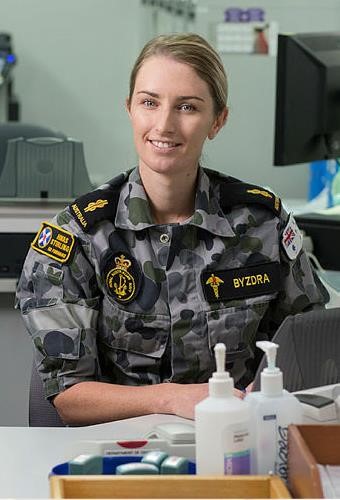 Although seagoing personnel have performed sickbay duties since the 16th century, it was not until 1833 that they were performed by dedicated ‘sickbaymen’. Even then, it was another 50 years before there was an official training and career structure. The RAN introduced dental sailors in 1921, who were formed into their own branch in 1948.

For much of the last century, the uniforms for male SBAs consisted of the double-breasted jacket and tie with peaked cap, as for other non-seaman sailors. Class I rig with gilt buttons was worn by senior sailors, while Class III rig with black horn buttons were worn by junior sailors. The wartime and post-war WRANS uniforms were likewise based on the male Class I and Class III uniforms until the 1990s.Like the rest of the RAN, the square rig ceremonial dress uniforms worn by all medical and dental junior sailors, have hardly changed in over 150 years.

Male SBA clothing for patient duties generally reflected RN practice from the 1880s, while female apparel did likewise from the 1940s.It was not until the 1990s that female medical and dental sailors were issued with the same ‘medic’s whites’ as males. Both sexes have since worn the same Proban® overalls, DPNUs and the new MMPUs at sea, in non-office Navy workplaces and in joint workplaces.

Dr Neil Westphalen graduated from Adelaide University in 1985, and joined the RAN in 1987.He is a RAN Staff Course graduate, and a Fellow of both the Royal Australian College of General Practitioners and the Australasian Faculty of Occupational and Environmental Medicine. He also has a Diploma of Aviation Medicine and a Master of Public Health, and was admitted as a Fellow of the Australasian College of Aerospace Medicine in 2012.

Commander Westphalen transferred to the Active Reserve in July 2016.

The views expressed in this article are the author’s, and do not necessarily reflect those of the RAN or any of the other organisations mentioned.