Abstract
The Golden Jubilee (2016) of the Army Malaria Institute is a significant event in the history not only of the Australian Defence Force, but that of the Australian nation. The Institute’s research – entomological, pharmacological, epidemiological and clinical – has been crucial in the maintenance of optimal healthcare for every operational and humanitarian deployment of Australian servicemen and women since the Second World War. The work of the Institute depends on the diagnosis of both clinical and experimental malaria by blood smear analysis. This basic procedure, ubiquitous to all clinical and preventive health endeavours, has meant that every patient with a fever and every malaria research volunteer are subject to serial bloodtaking. The nickname, “Vampire”, was given by apprehensive soldiers to those medics, nurses, pathology technicians and AMI researchers, taking blood. In the Vietnam War, CALLSIGN VAMPIRE and the VAMPIRE PAD (helipad) assumed great significance as a place of rescue, resuscitation and optimal medical treatment. Since the Vietnam War, “Vampires” entered the lexicon of Australian soldiers’ neologisms. Such is recalled as a living and enduring witness of 50 years of esteemed service – that every serviceman and woman might be protected from malaria, still in the twenty-first century a major killer of humankind.
Keywords: Australian Army Malaria Institute; malaria research; Vietnam War; history of malaria; vampires

Introduction
A Golden Jubilee is a special time. It is a time for looking back; but, in so doing, it is an occasion for using the tool of history to plan for the future.
Very few military institutions have, integral to their remit, a mission of research and the creation of new knowledge. The Australian Army Malaria Institute is one such. Its 50 years of service has the proudest record of ensuring optimal healthcare of our deployed servicemen and women. Its skills and advocacy will be greatly needed in the unknown future.

Malaria is, of course, primarily an infection of the reticuloendothelial tissues of the liver and the spleen and of the circulating blood. Blood is the portal of malarial infection; and its parasitised red cells are the cause of its dramatic clinical symptoms; and is also the medium of its diagnosis. The constant mutation of the parasite, leading to drug resistance, necessitates constant research. For 50 years, human volunteers, Aotus monkeys, mice and birds have been bled for the research that keeps this focused field of preventive medicine “ahead of the game”. For more than 100 years, Australian troops, stricken with malaria, have been bled in order that an accurate diagnosis be achieved, and a cure guaranteed.1

Medics and pathology technicians taking blood for such tests have always been the subject of a grudging reputation among soldiers – perhaps of being too enthusiastic in their blood-taking work! Certainly, since 25 May 1966, when Lieutenant Colonel Bill Rodgers established the 2 Australian Field Ambulance within the perimeter of the 1 Australian Logistic Support Group at Vung Tau in South Vietnam, army medics have so often been referred to as “vampires” – usually by an apprehensive and slightly reluctant patient, as their blood is being taken for diagnosis.

As blood-taking is basic and fundamental to the diagnosis, management and research in the context of malaria, this paper summarises some historical
details of this universal procedure; and of the Australian military folklore which has surrounded it.

Blood-taking in Perspective
Bloodletting has been one of the most common medical practices over the 2500 years of the written history of medicine. Bloodletting was enthusiastically practised by Egyptians and Greeks, by ancient Jewish doctors and the earliest Islamic physicians. In western medicine, the practice of bloodletting arose from Galen’s promotion of Hippocrates’ (460-377B.C.) 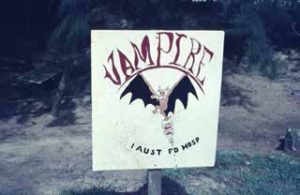 teaching that disease was due to an imbalance of the four humours of the body – blood, black bile, yellow bile and phlegm. Blood was the source of
heat; and as fevers implied too much heat, bloodletting was the logical treatment. Galen’s teachings predominated for 1500 years. It was recorded that:

“A massive amount of blood was drawn from President George Washington for his throat infection, accelerating his death in 1799.”2
Bloodletting was still recommended for sunstroke by Sir William Osler in his 1901 (Fourth) Edition of The Principles and Practice of Medicine; and still in 1923 for severe congestive cardiac failure.3

Erythrocytes were first described by Antonj van Leeuwenhoek (1632-1723) of Delft in 1674. In 1879, Paul Ehrlich (1854-1915), initially described as “an indifferent student” but later (1908) Nobel Laureate in Medicine and Physiology, obtained his doctorate with a thesis entitled Contributions to the Theory and Practice of Histological Staining. He stained tissue and blood with aniline dyes, thus demonstrating intracellular structure.

In the following year, on 6 November 1880, the French army surgeon, Alphonse Laveran (1845- 1922) was stationed in Constantine in Algeria. He
did not know of Ehrlich’s invention of bloodstaining from the previous year, but examined the blood of a soldier with clinical malaria. Laveran wrote that:

“…on the edges of a pigmented spherical body, filiform elements move with great vivacity, displacing the neighbouring red blood cells”.4 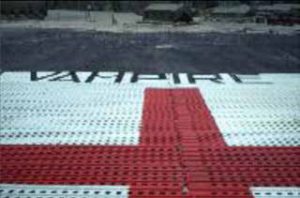 Laveran had seen the exflagellating motion of a male malarial gametocyte. He reported his findings on this “New Parasite Found in the Blood of Several Patients Suffering from Marsh Fever”.

In 1886, Camillo Golgi (1844-1926), he of the apparatus, showed that clinical malarial paroxysms of fever were coincident with the sporulation of the
parasite. Later, in 1889, Golgi also demonstrated that the malarial parasite of “quartan fever” was different in microscopic form from that which caused tertian fever.5 In 1890, of crucial importance, Dimitri Romanovsky invented a special stain to demonstrate the malarial parasite in red blood cells. He heatfixed thin blood films and used a combination of methylene blue and eosin to stain differentially the nucleus and cytoplasm of the parasite.6 It was this stain that Ronald Ross was to use, seven years later, in his definitive discovery of the transmission of malaria by mosquitoes.

On 20 August 1897, in Secunderabad, Ronald Ross demonstrated malarial parasites in the gastric lining cells of a virgin anopheline mosquito, fed four days previously on a human patient with clinical malaria.7 In the following year, 1898, Paul Ehrlich defined different types of leucocytes – eosinophils, basophils and lymphocytes – which immediately led to the concept of the differential leucocyte count. Since that time, every patient with a fever has had blood taken for initial diagnosis; and serially to monitor the successive treatment and subsequent convalescence.

Three of the pioneers who made possible the discipline of malariology today, were all awarded the Nobel Prize for Medicine or Physiology: Ronald
Ross in 1902; Alphonse Laveran in 1907; and Paul Ehrlich in 1908.

Australian Military “Vampires”
The term “vampire” has become one of proud heritage, held by veterans who served initially in three Australian military medical units in the
Vietnam War – 2 Field Ambulance, 8 Field Ambulance and the 1st Australian Field Hospital. 2 Field Ambulance was opened at Vung Tau in Phuoc Tuy
Province in June 1966. From that date, until 1972, battlefield aeromedical evacuations (“DUSTOFFs”) were conducted by UH-1 Iriquois helicopters of the US 57th Medical Detachment and by eight Iriquois helicopters of 9 Squadron of the Royal Australian Air Force. The callsign of the Australian receiving medical unit was CALLSIGN VAMPIRE.

Callsigns in the Vietnam War were designated by the US command, following recommendations from the Australian commanders. In June 1966,
there was a Staff and Command direction that the callsigns of Phuoc Tuy Province be bird names. Callsigns ALBATROSS, HERON AND SEAGULL were already designated. Lieutenant Colonel Bill Rodgers consulted with the officers and sergeants of 2 Field Ambulance and the name “Vampire” for both the radio callsign and the helipad of the Field Ambulance was proposed. Later, as Major General Bill Rodgers, Bill told me that perhaps the Americans did not realise that the vampire was a flying mammal, not a bird; but all agreed that “it was close enough” for the required conformity.8 8 Field Ambulance replaced 2 Field Ambulance in April 1967; in turn to be replaced by the 1 Australian Field Hospital on 1 April 1968.

A total of 1,918 Australian battle casualties and 10,000 non-battle sick and injured soldiers were evacuated to VAMPIRE PAD by “DUSTOFF” between
1966 and 1972. There were also landed, to repose in reverent dignity, the bodies of more than 500 Australian and New Zealand servicemen killed in
action.

Figure 4: The Vietnam War Memorial, Anzac Avenue, Canberra. Etched on the side of this memorial are radio transcripts including “Vampire Pad”, and “when we reached Vampire Pad we knew we had made it”. Photograph, November 2011.

In 1997, RAAMC veterans of the Vietnam campaign formed the First Australian Field Hospital Association. It was decided to adopt the vampire
symbol as the logo of the Association.9 Mrs Robyn Russell (formerly WRAAC Robyn Tolk), wife of WO1 George Russell OAM, designed the logo – finally a simple black vampire silhouette with its “fist” raised triumphantly to simulate both the concept of “first” and the excellence of the work of the Military Hospital and its “vampires”.10

Conclusion
Malaria has been a major determinant of the outcomes of military campaigns throughout history. In his major book, An Unending War, Dr Ian Howie- Willis has vividly portrayed the centrality of malaria control in the campaigns fought by all Australian servicemen.11 In the twenty-first century, malaria continues to be a major threat to military operations.

Military strategists and medical planners recall the annual malarial rates of 2,900 casualties per 1,000 troops in the Buna, Gona and Milne Bay Campaigns of 1942.12 Soldiers cannot shoot straight, let alone fight, with clinical malaria. After an attack, often a month’s convalescence is required before full health is restored. Prophylaxis brings its own concerns, both clinical and psychological, as well as political, as witnessed by recent (2015-16) aggrieved soldiers who took mefloquine to preserve fighting strength.

The preservation of health of future servicemen and women can be ensured only by continual research across the coordinated domains of entomology,
pharmacology, experimental pathology and clinical medicine. Such involves the sampling of blood; and a continuance of the proud traditions of both the “vampires” and the research volunteers who make such advances possible.